Few can argue that wealth hasn’t changed over the past 100 years.  The underlying factors that contribute to how we manage our money —family, work, society—are starkly different than in centuries past.  And because of that, we invest differently; we save differently; we spend differently.

There’s perhaps no better way to discuss the evolution of wealth than to contrast two of the most popular T.V. shows of the past decade:  “Downton Abbey” and “Modern Family.”  It’s an old-world vs. new world discussion, with “Downton Abbey” set in the early 20th century and “Modern Family” taking place today.  Viewing aspects of these shows side-by-side gives us unique insight into how dramatically wealth has changed over the years. 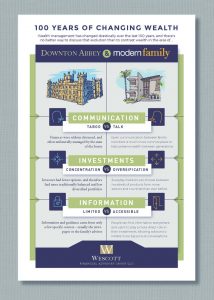 Before diving into the differences in wealth management, we need to acknowledge how the family dynamic has changed in three important areas:

These changes in family dynamics have had a material impact on how families deal with their finances.  Combine that with changes to the economic and social landscape, and nearly all aspects of a family’s financial profile are different in the era of “Modern Family” than they were when “Downton Abbey” took place.  Below are some of the major differences observed in wealth management from 100 years ago to today.

Practically anywhere you turn in modern society, you’ll find people boasting the benefits of talking with your family about money—how to earn it, how to manage it and how to leave it to the next generation.  Open communication has become commonplace, in part because women today play a more active role in family finances—from both an earning and planning perspective.  In stark contrast, laws of the time during which “Downton Abbey” takes place prohibited women from even inheriting an estate.

More open communication between families facilitates a smoother transition of assets from generation to generation.  It allows older generations to ensure their family enhances the wealth they’ve worked hard to build, and becomes a good steward for that wealth for years to come.  Sometimes it involves dictating terms of an inheritance, but other times it’s about making sure that children and grandchildren take their family’s financial responsibilities seriously.  This was seldom discussed in the old world, but has become standard in present-day wealth management.

The level at which investors can diversify their portfolios has changed significantly in the last 25 years.  In stocks and bonds, opportunities have broadened to new sectors and new countries—and new sectors within new countries.  The mutual fund industry has taken off, and there are new products that investors can purchase on an almost daily basis.  Go back 100 years, and investment portfolios were more straightforward, much more classically balanced and much less diversified.  There’s certainly a strong argument to be made that the modern, more diverse markets are better for investors.  But they are also far more complex—and only getting more complex as financial companies continue to try to innovate and regulators try to keep up.

Impact investing is a more recent example of increased diversification in the modern market.  Investors are beginning to see that they can do well by doing good—that is, investing in companies or people making a positive impact on the world while still making a solid return.  Impact investing hasn’t peaked yet, but it has certainly become more prevalent in modern society and is primed for growth.

There was no internet or social media in the era of “Downton Abbey” and the way by which people consumed financial information was limited to either the newspaper or a family’s advisor.  When an advisor made a recommendation, clients didn’t ask questions or scrutinize suggestions because they didn’t have access to information that could have raised red flags.  Today, investors want more—more information, more conversation and more of a direct role in where their money is being invested.  And they have access to all of that information at the push of a button.  This evolution has made the advisory industry inherently more advisory.  Instead of only picking investments, advisors can focus on their clients holistically and discuss new areas that might impact their family.

Finance is no different from technology or medicine in that over time, these industries will change in response to changing dynamics.  The difference in lifestyle and family structure between the times of “Downton Abbey” to the “Modern Family” era are so apparent that they have demanded a radical shift in not only how wealth is distributed, but how modern advisors discuss basic wealth principles with families.  Older generations today are more cognizant of how their wealth impacts the rest of their family and the world around them—and are changing their behaviors and strategies because of it.  That is the lasting impact of 100 years of wealth evolution.